Codex Speciálník, a manuscript containing polyphonic music which originated in Prague in the course of the last two decades of the 15th century, is considered one of the most important sources of music from Bohemia in the late Middle Ages.

The original name of the collection signifes a “special” type of singing, characteristic of the Czech milieu and different from the common liturgical collections.

Cappella Mariana introduces a programme composed of pieces from the Codex Speciálník which have for most part been neglected by musicians. The selection represents the varied and often surprising character of the FrancoFlemish polyphony from the 15th century, combining music from Western Europe and Italy with the works of some Central European authors, as well as some original compositions by unknown local authors. 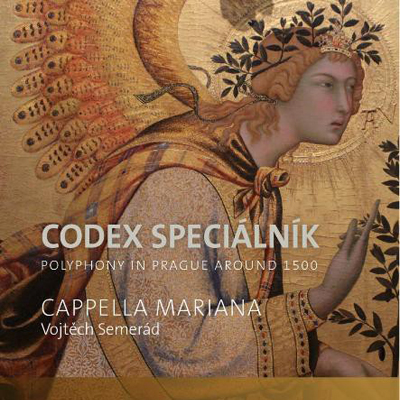 This website uses cookies to improve your experience while you navigate through the website. Out of these, the cookies that are categorized as necessary are stored on your browser as they are essential for the working of basic functionalities of the website. We also use third-party cookies that help us analyze and understand how you use this website. These cookies will be stored in your browser only with your consent. You also have the option to opt-out of these cookies. But opting out of some of these cookies may affect your browsing experience.
Necessary Always Enabled

Any cookies that may not be particularly necessary for the website to function and is used specifically to collect user personal data via analytics, ads, other embedded contents are termed as non-necessary cookies. It is mandatory to procure user consent prior to running these cookies on your website.

SAVE & ACCEPT
Scroll To Top